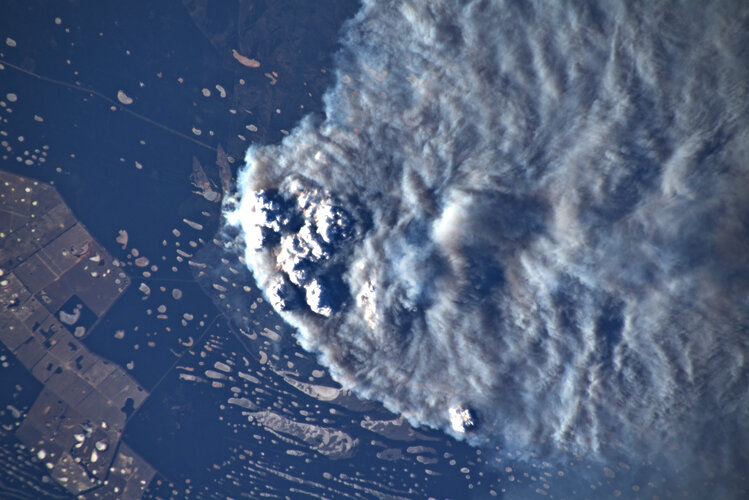 Another pair of eyes provides a sobering perspective on the fires ravaging Australia. ESA astronaut Luca Parmitano took images such as this one on 12 January from his vantage point of the International Space Station.

From satellite imagery tracing smoke and pollution, to images from the ground depicting apocalyptic red skies, there is no denying the fires’ devastating effect.

Starting in New South Wales and extending into Victoria, the ferocious bushfires have been raging since September and are fuelled by record-breaking temperatures. In the midst of a climate crisis, 2019 was the hottest year on record in Australia and with drought and wind, the fires have raged beyond seasonal expectations.

Winds have blown smoke over New Zealand and crossed the South Pacific Ocean, even reaching Chile and Argentina.

A staggering 10 million hectares of land have been burned, at least 24 people have been killed and it has been reported that almost half a billion animals have perished.

Damage to wildlife notwithstanding, the fires have had a serious effect on air quality. Earth observation satellites like Copernicus Sentinel-5 Precursor has traced increased concentrations of carbon monoxide in the past months along Australia’s southeast coast.

This image was taken as the Station flew above Fraser Range, in Western Australia, near the Dundas Nature Reserve.

Luca posted images of the fire to social media and said: “Talking to my crew mates, we realised that none of us had ever seen fires at such terrifying scale”.

Like Luca, the world continues to monitor the fires. If there is a silver lining around the smoke, it is the increased awareness of and calls for urgent action on climate change that is continuing to sweep the globe.