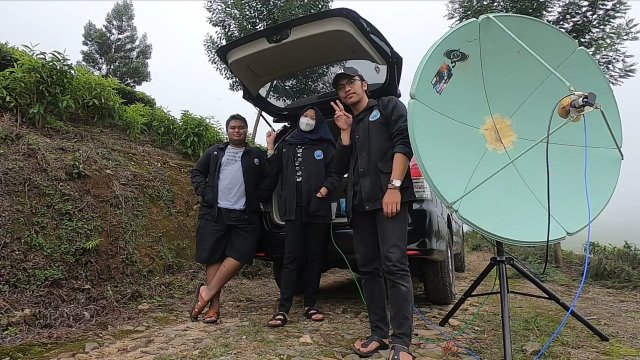 Over several months Remco den Besten PA3FYM, and Rene Stevens PE1CMO had helped Farid Farham YC1HVZ get equipment operational for use on the QO-100 satellite which has an uplink in the 2.4 GHz band and a downlink in 10.45 GHz.

Farid’s location in Bandung is on the edge of the satellite’s footprint and he didn’t have a clear view to the horizon so Farid had to travel to a location in the hills of Java to get an unobstructed path to the satellite which had an elevation of just 0.8 degrees.

An attempt on Monday, January 24, was unfortunately unsuccessful and Farid YC1HVZ returned to the hill on Thursday, January 27, for a test with Remco PA3FYM and Rene PE1CMO. At about 07:40 GMT they heard the first signals from YC1HVZ but Farid couldn’t receive the QO-100 signal. It’s rainy season in Indonesia, which makes it much harder – the 10 GHz downlink has to get through the heavy rain showers which attenuate the signal.

After a few tests conditions improved and Farid heard his signal coming back from the satellite and by 07:50 GMT it was possible to make a two-way contact. Rene PE1CMO was the first to receive Farid and the first who Farid received but it was Remco PA3FYM who made the first complete contact exchanging signal report, call and locator, after which Rene has a QSO with Farid. Unfortunately the signal in Indonesia then dropped due to clouds and rain but later it came back and YC1HVZ made six more contacts. Farid hopes to try that location again or go to a location on the beach on the west coast of Java for a DXpedition.

Congratulations to Farid, Remco and Rene.

See a translation of the ORARI report at https://tinyurl.com/IndonesiaORARI