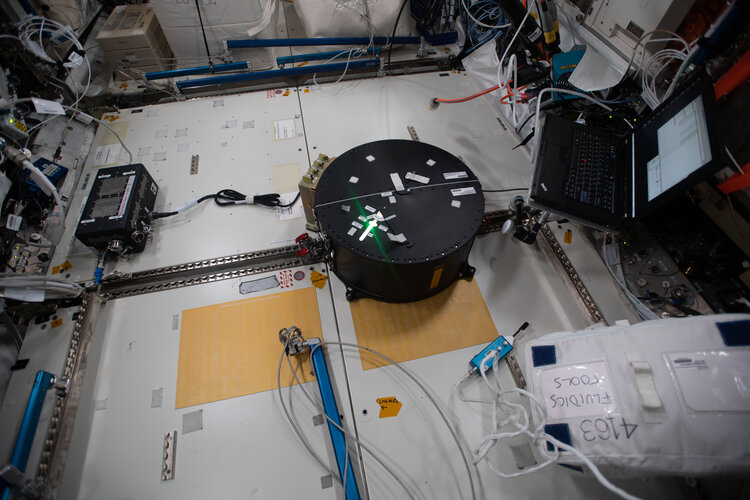 The International Space Station is an exciting place for experiments. This one in particular was making waves in space. Called Fluidics, the experiment studies fluid dynamics in microgravity and recently performed another successful round of science on board the Space Station.

Developed by French space agency CNES and co-funded by Airbus Defense and Space, the Fluidics or Fluid Dynamics in Space experiment is probing how fluids behave in weightlessness.

Have you ever tried walking while carrying a full cup of water? Your steps invariably cause the water to slosh about, making spills hard to avoid. Now imagine a satellite turning – the fuel inside will slosh, affecting the satellite’s stability.  The experiment will help improve the performance of satellite propellant systems, extending their working lives by using every last drop in their tanks.

A second part of the Fluidics experiment will look at capillary wave turbulence in liquids. On Earth, gravity and surface tension influence how energy dissipates in waves or ripples. In space, scientists can observe how surface forces behave without gravity.

By looking at capillary wave turbulence without gravity interfering, researchers can single out non-linear interactions. This could help us improve climate models forecasting the sea states and better understand wave formation on Earth, like rogue waves for example.

The experiment is made up of five small, transparent spheres housed in a black centrifuge seen here. Three spheres hold water for the wave-turbulence research; the other two carry a special liquid with low viscosity and little surface tension for sloshing.

Fluidics was first installed and run by ESA astronaut Thomas Pesquet during his Proxima mission in 2016. The most recent session was completed by NASA astronaut Chris Cassidy in the European laboratory on board the Space Station.

Learn more about the Fluidics experiment with this infographic.