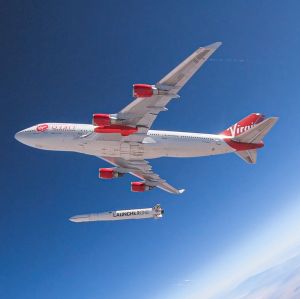 Payloads successfully deployed into our target orbit! We are so, so proud to say that LauncherOne has now completed its first mission to space, carrying 9 CubeSat missions into Low Earth Orbit for our friends @NASA. #LaunchDemo2

RadFxSat-2 is the fifth and final Fox-1 satellite built by AMSAT. The RadFxSat-2 spacecraft bus is built on the Fox-1 series but features a linear transponder “upgrade” to replace the standard FM transponder in Fox-1A through D. In addition, the uplink and downlink bands are reversed from the previous Fox satellites in a Mode V/u (J) configuration using a 2 meter uplink and 70 cm downlink. The downlink features a 1200 bps BPSK telemetry channel to carry the Vanderbilt science data in addition to a 30 kHz wide transponder for amateur radio use. Telemetry and experiment data can be decoded using FoxTelem version 1.09 or later.

Participation in telemetry collection by as many stations in as many parts of the world as possible is essential as AMSAT Engineering looks for successful startup and indications of the general health and function of the satellite as it begins to acclimate to space. AMSAT will send a commemorative 3D printed QSL card to the first station capturing telemetry from RadFxSat-2.

[ANS thanks AMSAT for the above information]