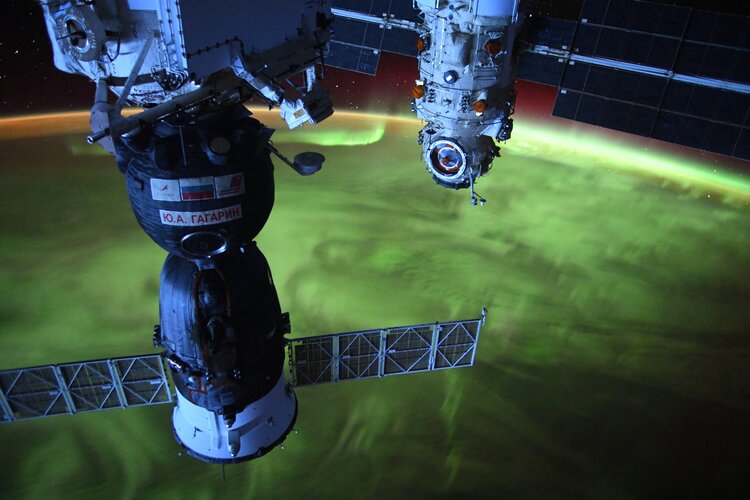 The Station saw quite some aurora activity that month, caused by solar particles colliding with Earth’s atmosphere and producing a stunning light show.

Fast forward to October and space is quite busy.

On 9 October the Sun ejected a violent mass of fast-moving plasma into space that arrived at Earth a few days later. The coronal mass ejection (CME) crashed into our planet’s magnetosphere and once again lit up the sky.

CMEs explode from the Sun, rush through the Solar System and while doing so speed up the solar wind – a stream of charged particles continuously released from the Sun’s upper atmosphere.

While most of the solar wind is blocked by Earth’s protective magnetosphere, some charged particles become trapped in Earth’s magnetic field and flow down to the geomagnetic poles, colliding with the upper atmosphere to create the beautiful Aurora.

While the view outside the Space Station is mesmerising, the astronauts inside are busy with science and prepping for the next crew’s arrival later this month.

In the meantime, Thomas has taken over command of the Space Station and is busy completing more science ahead of the end of mission Alpha and his return to Earth.

The astronauts have taken up space farming lately, tending to New Mexico Hatch Green Chili peppers in the name of science. A few investigations are looking into different aspects of plant behaviour in microgravity.

Tending to the body via exercise is also standard practice on the Space Station. The crew performed cycles of experiments looking into immersive exercise practices as well as the familiar Grasp experiment on reflexes under microgravity conditions.

Even downtime is ripe for experimentation, with Thomas wearing a headset to bed to track quality of sleep under weightless conditions. Read more about the goings-on in the latest monthly science recap.


Click here for original story, Calm above the storm