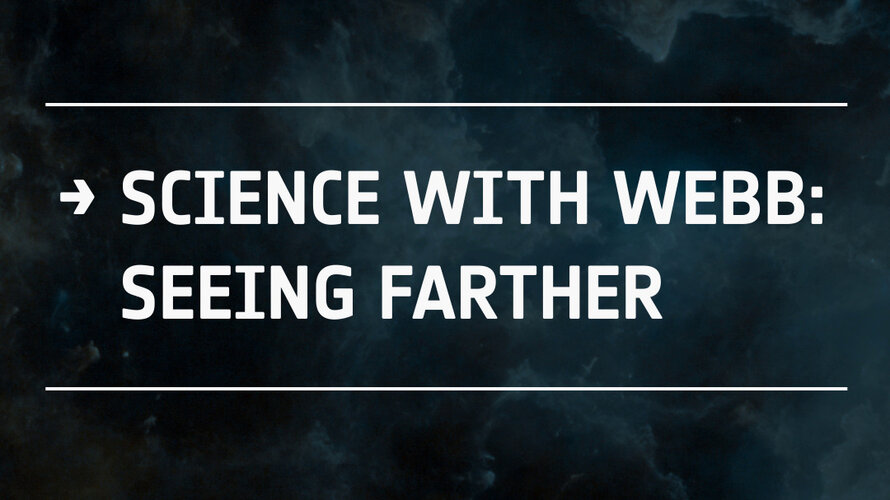 The James Webb Space Telescope (Webb) is designed to answer fundamental questions about the Universe.

With 100 times more sensitivity than the NASA/ESA Hubble Space Telescope, and a mirror which is nearly double the size of ESA’s Herschel Space Observatory, it can detect infrared light generated by galaxies as they formed more than 13.5 billion years ago, in the aftermath of the Big Bang.

For the first time in human history we have the opportunity to directly observe the first stars and galaxies forming in the early Universe. When we observe something that is a million light-years away, what we are seeing is actually how it looked a million years ago: we are looking back in time.

The light of galaxies that are billions of light-years away travels to us through the expanding Universe, which causes its wavelength to stretch into the infrared. Webb’s infrared vision makes it a powerful time machine that will peer back over 13.5 billion years, to a time shortly after the Big Bang.

Some of Hubble’s most remarkable images were its ‘deep fields’, which used long exposures – over days – to capture thousands of galaxies in single images. They revealed the most distant galaxies ever observed till then, and showed us young galaxies when they were only a few hundred million years old and were small, compact and irregular.

Webb’s infrared sensitivity will not only look back farther in time but will also reveal dramatically more information about stars and galaxies in the early Universe. Webb’s data will also answer the compelling questions of how black holes formed and grew early on, and what influence they had on the formation and evolution of the early Universe.

Webb is an international partnership between NASA, ESA and the Canadian Space Agency (CSA).

Find out more about Webb in ESA’s launch kit.